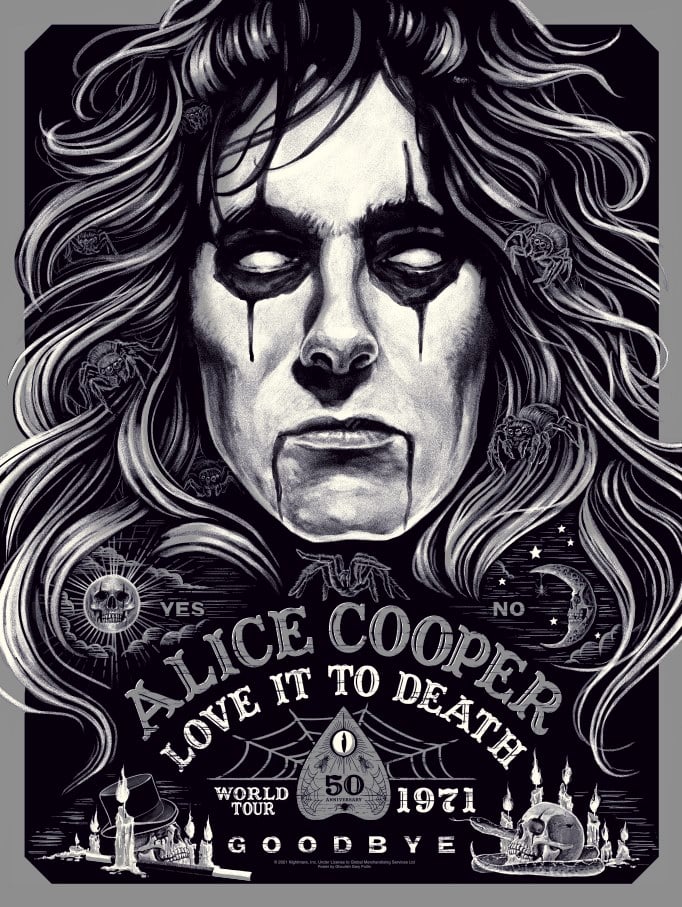 Please allow up to 8 weeks for shipment of item(s)

Released just over fifty years ago on March 9, 1971, Love It to Death was Alice Cooper's third album, and their first commercial success.

The band was well known for their genuinely menacing live performances, the audience rarely rushing the stage fearing that Alice’s dark intimidating prowling would escape the invisible boundary that separated them. There was no hint of the clever humor that would show up in some of his later work. At a time when others were sporting eyeshadow and feather boas, Alice Cooper was appearing in a straitjacket draped in a real boa constrictor.

By 1973, the band would become so huge that their U.S. tour in support of the chart-topping "Billion Dollar Babies" broke box-office records then held by the Rolling Stones, and the rest is music history. When we had the chance to create an official print for Alice Cooper, we immediately jumped at the opportunity. And the first call we made was to world renowned artist Ghoulish Gary Pullin:

I don’t think my friends at Collectionzz were prepared for my excitement when they asked me to create this anniversary poster for Alice Cooper. To put it mildly, I’m kind of a fan and have been to more Alice Cooper concerts then I have fingers to count. As a teenager in the 1980s I was fully consumed by horror movies, monster magazines and heavy metal. During that time Alice Cooper was having a revival and my first show was in 1989, when the Trash tour came through my home town. I’ve been hooked ever since.

Love it To Death has some of my favourite all time rock songs on it, “The Ballad of Dwight Fry”, "I’m Eighteen”, “Caught In A Dream” and "Is It My Body” are all choice cuts and most remain in the bands set list. As I was conjuring up ideas for this poster, I knew it had to represent the band’s eerie beginning. Back when Love it To Death was about to become a huge commercial success. I wanted to capture that energy somehow. Then I remembered the infamous urban legend about how the band got its name from a Ouija Board session.

The planchette ominously spelled out "Alice Cooper” and a new rock and roll monster was born, ready to possess the masses with a raw sound and shocking live show. I can’t wait until we can see and hear these songs live again. Until then, I hope Alice Cooper fans enjoy this poster because I sure as hell loved making it. - Gary Pullin